The Caverns of Ugard Review 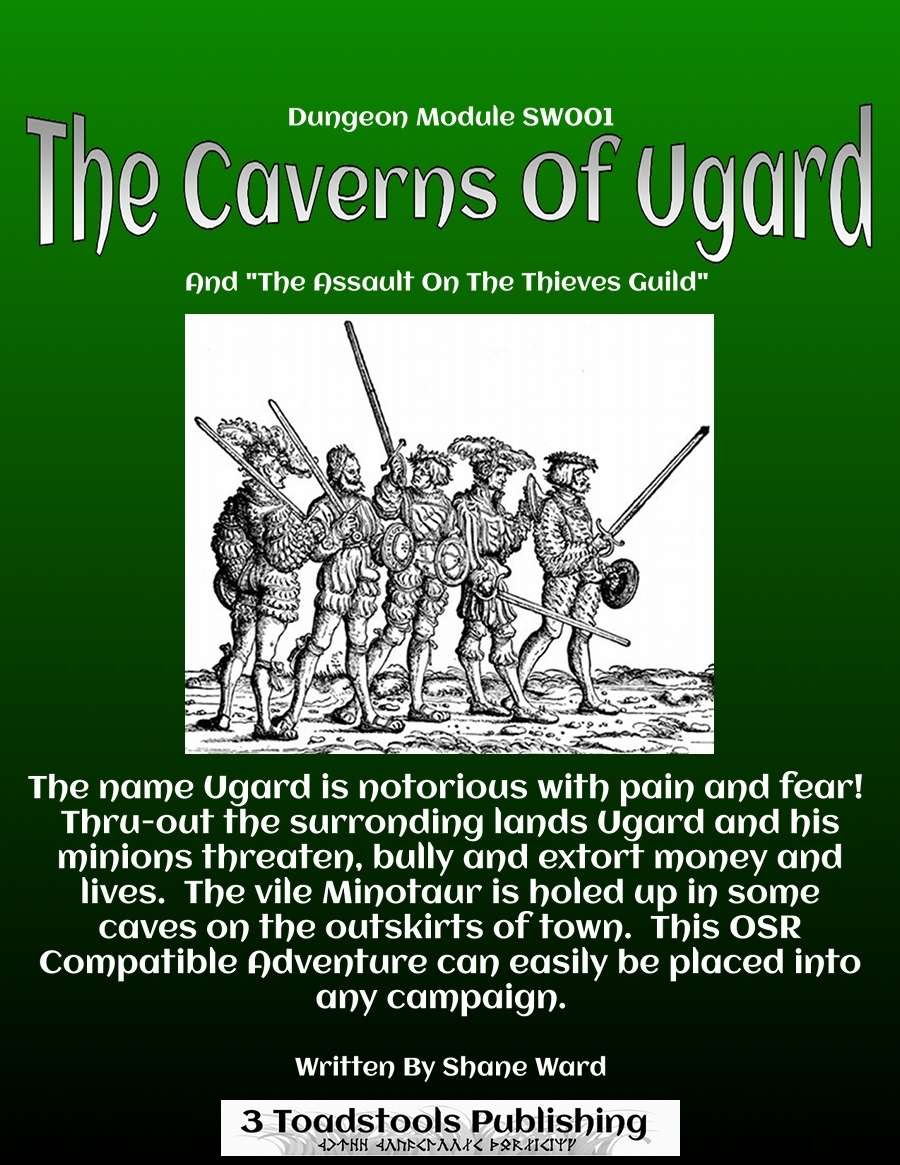 The Caverns of Ugard is a short adventure from Shane Ward of The 3 Toadstools blog, meant for 2nd to 4th level characters. If I remember correctly, it was a free download from his blog, then later went up at RPGNow as a Pay What You Want product. It's essentially a one page dungeon, 12 rooms total. It's a lair of a minotaur (the titular Ugard) and his goblin minions.

Originally it was for OSR with generic stats for monster (Hit dice, damage, armor class), but the most recent version is system neutral and statless. So I used the original version. I ran this because I needed a quick little adventure to get the party members up one more level, they were about 400 xp short of 5th level.

Although there are 12 rooms, three are devoted to a presumably friendly Dwarf clan, one is empty, and one is a lake that the PCs probably will bypass since it is full of piranha. Of the remaining seven, four have encounters with goblins, one is a treasure room, one has two pet wolves, and the last is the showdown with the minotaur and his goblin entourage.

Each room is detailed fairly well, with the contents of the room mostly being cosmetic touches. With one exception, a room with an evil idol makes it harder to hit.

The room description for one entry, the pet room, could have been clearer. I wasn't sure if the wolves were penned up or free in the room. They are described as starved, yet there are half-eaten deer carcasses in the room. If they were free to move around, presumably they would have eaten the other halves of the carcasses. (When they were young, my dogs would bring home deer carcass parts for weeks. Hunters sometimes leave them)

The Dwarf clan also seems a bit out of place, surely they don't base their whole settlement in just three rooms (one of which is a treasure room, actually). Also, given their numbers and high hit dice, they surely could take out the goblins and minotaur.

I ran this with the same party from Taken from Dunwich, mostly 4th level characters: a 4th level Paladin, 3rd level Cleric/Ranger, 3rd level MU/Thief, 4th level Bard (Dragon #56, mostly), 4th level Hunter (2e Ranger), 4th level Warlock (my own creation based on an OGL version) and a 3rd level fighter henchman. 4th level was the high end of the module (2nd-4th) but is probably too high. They blew through the goblins like a blowtorch through butter and the minotaur went down pretty easy (though in that case, it likely helped that I was using 1e based rules and so a long sword did d12 of damage, not d8).

On the other hand, the minotaur (with 6 hit dice) is probably too tough for 1st level characters. So the low end is probably correct.

In retrospect, I probably should have replaced the goblins with something tougher — hobgoblins, bugbears, or even norkers (did they ever get used by anyone outside of The Lost Temple of Tharizdun?). But I was pressed for time.

As a quickie adventure, The Caverns of Ugard is competent enough but is somewhat ordinary. Minotaurs can make pretty good villains, but goblins are generally little more than sword fodder. I would have liked to have seen something more fitting for his minions. And maybe a bit more for the Dwarf clan, maybe a named NPC or two there.

(Since it's a PWYW adventure, I'm not going to grade it, grab it yourself and see what you think.)
Posted by Jeremy at 5:54 AM

Email ThisBlogThis!Share to TwitterShare to FacebookShare to Pinterest
Labels: Adventure, The Caverns of Ugard, The Three Toadstools