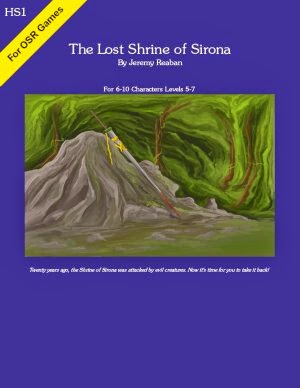 This is sort of cheating as a news item, since I made it, but I just released the first (of hopefully) a number of modules, HS1 The Lost Shrine of Sirona. It's meant for first edition and for 5-7th level characters, though I ran it for a 5th/6th level party and they found it kinda easy, but they also had 9 characters total, which complicates things.

It's a very short, fairly simple dungeon crawl, 9 rooms and 2 pages. I've been working on a much longer (80 room) dungeon, but I wanted to release something short and simple as a test.

Slightly updated version —  Fixed a couple typos, added AL to critters I forgot to, and added a monster xp summary in the Notes. Which as it varies from rules system to rules system, might be off, but it's more or less the 1e xp values (I also round)