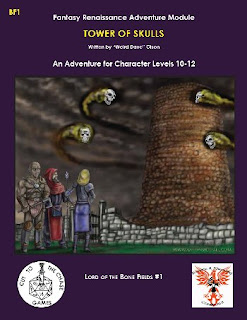 BF1 Tower of Skulls is a high level (10th to 12th) adventure from Cut to the Chase Games for Swords & Wizardry. It's actually been released for several different systems (Pathfinder, 5e, and even Savage Worlds) but is pretty strictly an old school dungeon crawl. It does seem to have been written with 5e in mind and then back converted, so there are a few oddities and problems arising from such a conversion.

The Tower of Skulls has something of a lengthy backstory, but essentially a rival demon prince of Orcus, a demon prince of undead plants, ended up on the losing end of a war and Orcus imprisoned him in the Tower of Skulls. But the PCs probably don't know this and simply go to the tower for other reasons. Several ideas are presented, but not are particularly compelling, other than the lure of loot.

One tricky aspect is that the tower only appears in the prime material plane for one day out of a month, the night of a full moon, and apparently travels from world to world, popping up in different locations. Sort of like the bad guy's fortress in Krull. So the PCs have to be in the right place at the right time, and, at least as written, only have a single night to explore the tower.

The tower is six levels and basically 55 keyed locations. Most of these locations have a fairly detailed entry, half a page (each page is two column) is the norm. It's a pretty good mix of traps, riddles, things to poke/play around with, and combat encounters. Lots of combat, a little more than 20 by my count. Peppered throughout these room descriptions are a handful of GMing tricks from the author, some which seem rather dubious (one about wearing a ring on your finger and having players try to take it off you. No thanks, you're not touching me) 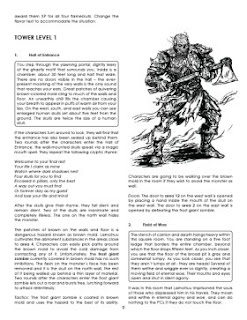 For the most part, the room descriptions are well done and the contents original. There is some repetition of monsters, though usually just two different encounters with a monster type. Two black pudding encounters, two with Vrocks. The most common opponent is something called a "Gwiddon". Unfortunately the monsters are not described at all (just statblocks in the back) so in the case of monsters you might not be familiar with, you're out of luck. It sounds like a Gwiddon might be some sort of hag, but I don't know. I tried looking on the S&W SRD site, it didn't have it. Google turns up an NPC from a video game.

As I mentioned, according to the back story the tower only stays in place for 12 hours. Most parties in any game system will be hard pressed to go through 20 combats in that time, but in my experience, at least with my players/party, they can go about 8-10 before having to retreat. The module mentions various places where they can get a "short rest", which I guess is a 5e thing.

Somewhat similarly, while there's a decent amount of magic items (though nothing particularly powerful), there's a lack of monetary treasure. The biggest windfall are the jeweled collars of two headed dogs. There don't seem to be any coins at all.

It was apparently funded by a Kickstarter, but to be honest, you probably couldn't tell. The layout is old school and is more or less hobbysit level, while the interior art looks like it could be simply stock art (but I don't recognize it, so I guess not). The maps though are really quite nice and hand drawn. I guess that's where the money went. 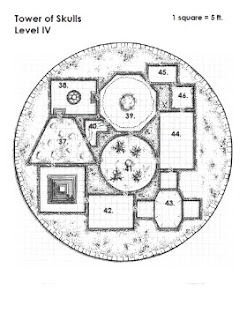 I ran it with a party of six: 12th level thief, 10th level fighter, 10th level witch, 9th level barbarian, 9th level templar (not the Dark Sun one, basically a Solamnic Knight but not in Dragonlance), and 8th level android (homebrew class). For the most part it went okay, but after halfway through it they got bored and wanted to leave. As written, this is possible, but means they forfeit half the magic items they are carrying. As I didn't want a mutiny, I omitted that part of the module.

Tower of Skulls isn't a bad module, and the author certainly put a lot of effort into it, but I don't think it's a particularly good one. It tries to be too cute with the conditions that screw over the players yet doesn't offer any substantial rewards. It's also something of a gotcha module in terms of plot. Should your players succeed in this one, it sets up the bad events of the next modules in the series (forthcoming). Most importantly, it just wasn't that fun.

Email ThisBlogThis!Share to TwitterShare to FacebookShare to Pinterest
Labels: Cut to the Chase Games, Review, Swords & Wizardry, Tower of Skulls