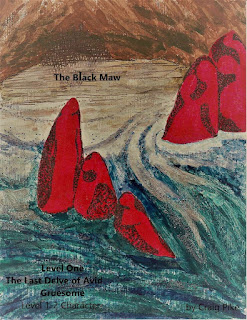 Craig Pike has just released level 1 of what will hopefully become the Black Maw megadungeon.  Megadungeon plans can fizzle out, as I know first hand, with my Reynaldo Lazendry Dungeon only at 2 (out of 5 planned levels) and there's also the promising Dungeon of Crows that fizzled out apparently after 2 entries.

But he's used a sparser key format which will should make writing pace easier to maintain.

Its PWYW, so check it out and donate if you like it. Also features a map by my favorite cartographer, Tim Hartin.
Posted by Jeremy at 5:55 PM