The Sepulcher of the Burning King Review — Creepy Crypt Crawl 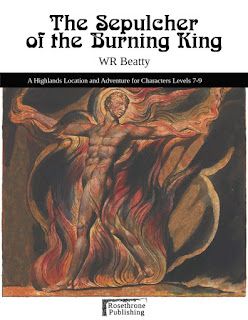 The Sepulcher of the Burning King is a short (20 or so encounter areas) module from Rosethrone Games, a site based adventure (ie dungeon crawl) part of their Highlands hexcrawl setting. One of the things I don't like how hexcrawls is that they tend to just provide short descriptions of an adventure site and expect the DM to do all the work filling out the encounter. One of the nice things about Rosethorne Games is they have been releasing modules like this to actually do the work of filling out the hex crawl.

Perhaps due to the old public domain artwork taken from old 19th century books on knights and such, it's got something of a King Arthurian feel to it, not Camelot itself, but the later, Holy Grail quest days, the idea of wandering a strange wasteland and coming across an old ruined castle with something weird and creepy in it. 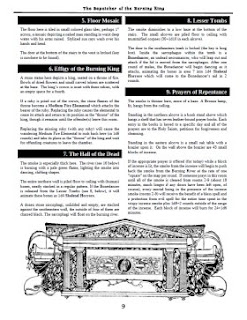 In this case, it starts off with an encounter with a chained sphinx (which is apparently the only encounter described in the hex crawl) which is arguably fairly normal, but that is only the entrance to a strange tomb or shrine, which gets creepier as the party explores.

Indeed, exploration and interacting with the environment of the dungeon plays a very large role. For instance, to get to the actual tomb (and loot) of the Burning King, the party must figure out how to cross a river of fire. It's not something particularly outlandish, just using stone sarcophagi as boats.

There is combat though, but this is largely up to the PCs, if they come to loot the tomb or not. The PCs do not face the usual monsters though, with such foes as silk mummies, bonedancers, rended horrors, silent deaths, and more. Mostly undead, with an assorted creepy crawlie, but will keep your players off balance. 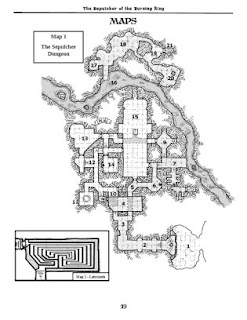 The originality also extends to the loot, with several unique magic items and individual gem types (rather than just gp value). There's actually quite a bit of loot, perhaps more in line with 1e than the 0e (a Swords & Wizardry variant) that it's written for

As mentioned, it uses a lot of old public domain art to good effect and the PDF is surprisingly elegant, if simple. The map is by Dyson Logos, not my favorite cartographer, but functional

The Sepulcher of the Burning is the first module I bought from RoseThrone Games, mostly because it was cheap (at $1.99), but I'm very impressed. It's clever and original. Even though it's part of a hex crawl, you can drop it pretty much anywhere and it comes with a suggested set up, being hired by a creepy mage to recover something.