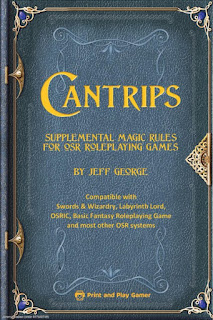 Cantrips! Zero-level spells. I remember when they first came out in Dragon magazine and found them fascinating, they were something of a more practical use of magic, with spells to clean and dust and pull pranks. But to actually use them in your AD&D game, your MU would have to give up a 1st level spell, and frankly, there's just too many useful 1st level spells for a MU to do that, even at mid to high levels. So it was basically a neat idea that was quickly forgotten, except in special cases (like 0-Level characters).

Cantrips did make a reappearance in the 3rd edition of the game (and in 5th), where they became spells cast in addition to 1st level spells, and some of the crappier 1st level spells were shifted downward (such as light and mending). It actually went a long way to making 1st level (or even 2nd) MUs be more useful, but they largely escaped a re-emergence in the OSR. At least until now, with Cantrips: Supplemental Magic Rules for OSR Roleplaying Games by Jeff George, which is $1.99 for 32 single column pages and usable for all major flavors of OSR.

As I mentioned, the original cantrips were largely spells that were practical and unrelated to existing or higher level spells. Here in Cantrips, the author takes a different take and makes them (16 in all) essentially simpler, less powerful versions of 1st (and sometimes higher) spells. For instance, instead of web, there's cobweb. It doesn't do much except make one natural cobweb or a tiny cobweb that will hold no more than 2 lbs. Not obviously useful for combat, but useful for a creative player. The most combat useful cantrip is zap, which does 1d4 damage to a target, but requires a successful to hit.

Other useful notables include spark, which just lights something flammable; tap, which is just a slight push; leap, which doubles how much the target can jump. There's one called parlour trick which is a minor illusion. One that strikes me as being too powerful is summon vermin, which also includes some control over the summoned animals (randomly rolled off a table). While I don't think two dozen mice would pose a threat, a handful of stray dogs or even cats could (at least if you use the AD&D stats for cats) 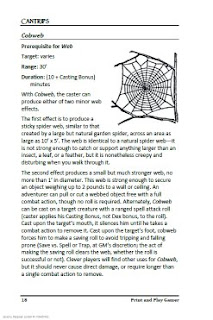 Casting cantrips is a somewhat unusual procedure. Essentially they do not take a spell slot, but they will eventually use one up. This is because casting cantrips requires a "casting roll", which is rolling a d20, adding a bonus (based on intelligence and level), and seeing if it's over 8 or not. If it is, you cast the cantrip (and can try to cast it again later on). If not, you lose a spell slot. This strikes me as something of an odd procedure (unless you are playing Traveller) and also ultimately hamstrings the MU perhaps even more than if you weren't using the rules.

I mean, if you have one spell, probably sleep, you're going to have a big role in at least one encounter. But if you try to use a cantrip, you might very well lose that one spell after only one or two uses. So you wouldn't have that sleep when your party faces off with those dozen orcs.

As PDF's go, it's somewhat plain, but not spartan. There's header and footer, tables use different shades of grey, and there's a handful of art. It uses the single column text format, so somewhat big unless you are reading on a phone. It comes with a separate reference page PDF as well. 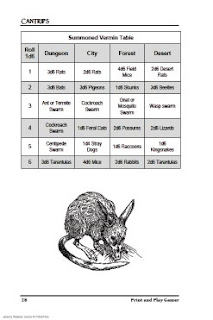 I like the basic idea of the author's take on cantrips, but ultimately the roll until you lose a spell slot system punishes low level characters more than it helps. It would be better to simply say the MU can no longer cast it after failing (which is what Beyond the Wall does) or even just let the player cast it all day if they want(which is how I handle cantrips in my campaign), since after all, the effects are very minor. Even zap is really not better than a thrown dagger or dart. But it's worth a look if you are looking to give options to MUs in your game.