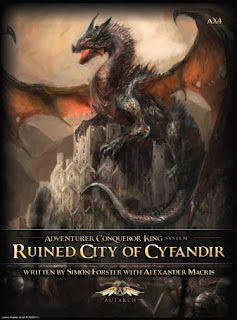 Although I am not a fan of the Adventurer Conqueror King System, from Autarch, I was deeply impressed by their first module (besides Dwimmermount that is) that supported their system, The Sinister Stone of Sakkara, which was a nice take on the Keep on the Borderlands type scenario. So I quickly picked up this, Ruined City of Cyfandir as soon as I noticed it was out. It's meant for levels 5 to 7 and for ACKs (so probably a little higher level for Basic/Original games) and is 30 pages for $4 in PDF.

The premise is simple enough, an elven city was overrun by a dragon and her lizardman followers. 200 years later, they are still there. The PCs either stumble upon the city or are sent there. Presumably they explore and loot. There's only about 25 or so special locations in the city itself, most of which deal with lizardmen or the newly arrived goblin tribe. 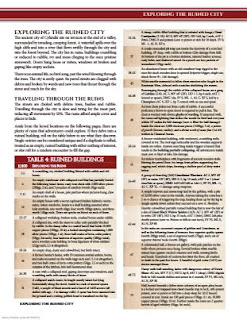 It is however supplanted by a d100 random building/encounter table that has several dozen entries which describe various ruined buildings they might decide to explore. Some of these are presumably meant to occur over and over (and thus have large ranges), like deserted workshops or spider filled ruins. But there's probably 30 unique encounters

Overall the challenge of the module is rather unbalanced. All the encounters are cakewalks for a 5th to 7th level party (having lower hit dice and not massive numbers, either), except the dragon herself. And she clocks in at 18 hit dice, as this uses BECMI style dragons which are much tougher than OD&D/AD&D ones. With that said, the dragon still only has 80 something hit points, so should not be out of the realm of mid level characters to defeat.

If you don't have ACKS, it's still pretty easy to convert. ACs are perhaps the weirdest, to get ascending AC you just add 10 to the ACKS figure, then from there subtract from 20 (or 19) to get the descending 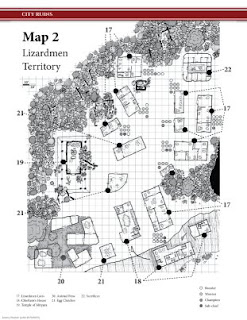 As with the Sinister Stone of Sakkara, the level of detail is similarly lopsided. Treasure gets a detailed breakdown (with potions getting a color and taste, even) and is largely unique, but NPCs have no physical descriptions and usually no personalities.

The module is nice looking, with a lot of full color artwork. I'm not sure the artwork has anything to do with the module itself, it seems like stock art pieces that sort of fit. Still, it's expensive stock art, like Dean Spencer. For instance, by the entry for an emissary to the dragon is a picture of a Celtic warrior killing two grey skinned humanoids. It's a very nice piece (other than the warrior not wearing trousers but some sort of loincloth-kilt thing). 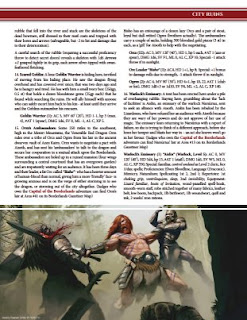 Ruined City of Cyfandir is not bad, just somewhat lackluster. It also seems more like a low level premise than for mid level characters. Do you players enjoy dealing with lizardmen and goblins at mid level? Mine do not. I also don't think it leverages the best part of the official Autarch setting, which is more of an Ancient world than Medieval.  But it's only $4 for the PDF and if you need a small ruined city, you could do much worse.