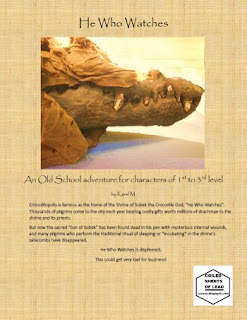 He Who Watches is an Egyptian themed adventure from Karel M of Coiled Sheet of Lead Games. By Egyptian themed, I mean apparently literally set in Egypt, though a relatively modern one (Roman era), not just an Egyptian like country.  I had a very strong sense of deja vu while reading it, because I had read a very similar short story in a book of historical mysteries (Chosen of the Nile by Mary Reed and Eric Mayer in The Mammoth Book of Egyptian Whodunnits).

It's meant for lower level PCs (no system is expressly given, but seems 1e-ish) and set in the city of Crocodilopolis (the Greek name, original name Shedet), essentially the plot is that pilgrims to a temple of Sobek (a crocodile god that is a good protector god of the dead) are going missing, and the PCs are hired to investigate. A subplot is that one of the holy crocodiles has just died.


Depending on who the PCs run into, they will be hired to find out the reason for the disappearance of the pilgrims and possibly the death of the holy crocodile. The former will require a dungeon crawl into the tomb of Sobek, which is actually more weird/creepy than Eygptian. Indeed, the cause of the disappearances is somewhat Lovecraftian.

The map is apparently based on a real tomb, so does not really make the best dungeon in terms of freedom to explore, it's rather linear. It's also perhaps not the most coherent module, as the author seems to throw in a lot of ideas. But they are largely interesting and often amusing ideas. 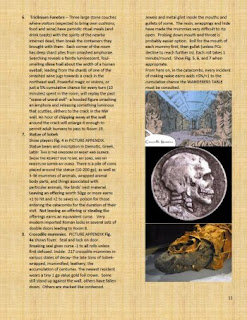 It's a fairly short module, but it's offset by a huge amount of background material and quirky personalities for NPCs. The net result of this is that the module feels something more out of an episode of Xena than historical or pulp sword & sorcery. This is not a bad thing, I liked Xena.

The PDF is horrendously ugly, with a faux-wood background and lots of random pictures, a mix of comic books, stills from movies, old line art, old color paintings, and photographs of various ancient objects, including mummies. It is however, quite readable, which is what counts most. The map is pretty bad though and while it can be copied from the PDF to a somewhat larger view, it's still kinda crappy. 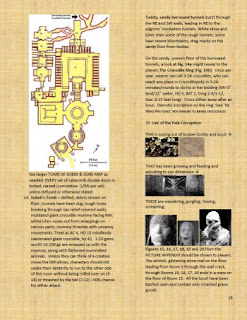 He Who Watches is far from a perfect module, but it exemplifies the best of what the OSR is about, unleashing people's creativity and it has that sort of whimsy found in the early days that is often lost in modern products. I'm not sure how much usability it has in most games (I bought it because I needed some Egyptian themed adventures for my game), but with some tweaking it can fit a more traditional game, mostly removing minor details like the perfume cones on people's heads.
Posted by Jeremy at 9:12 PM