Tomb of the Lovelorn Review — Undeath Will Tear Us Apart 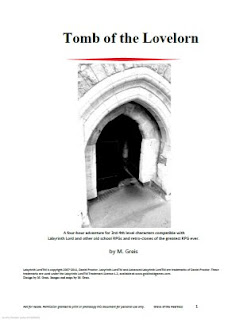 Tomb of the Lovelorn is a short dungeon from M. Greis for lowish (3rd to 4th) level Labyrinth Lord characters, though there is some fuzziness in both the system and level range. Apparently it was originally written for a Danish RPG convention and translated into English, and although it's quire readable, it does have some odd phrasings and many minor errors.

While it's a tomb crawl, it's definitely an unusual one, with no standard undead. Instead its basically a prison created by an evil magic-user to keep his romantic rival in a state of undeath, to prevent him from being reunited in death with his lover (that the evil magic-user also fancied). This is done by two undead crypt keepers, who apparently abduct nearby residents and "feed" them to the imprisoned lover, who has become a giant blog of flesh. 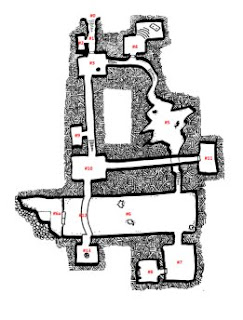 There's only about a dozen rooms to the complex, but each gets quite a bit of detail, including a boxed description you can read to the players. It's focused more on exploration on combat, as most of the monsters are surprisingly friendly, at least at first, and the toughest monster (the giant blob of flesh) can be defeated just by talking to it. The two undead caretakers pose a challenge only if they are faced together, and even then might be more suited for 2nd to 3rd level characters.

There's not a lot of loot, in fact it espouses a system where PCs get xp merely for exploring, but does include extra treasure for those of us that use gp for xp. It's not a lot though. On the other hand, there are a number of unique magic items, including a magic sword, dagger, and spear. The dagger is pretty nice, but the swords powers are a bit fiddly, +1, but getting a higher bonus if it misses or doesn't kill the opponent on its first hit. 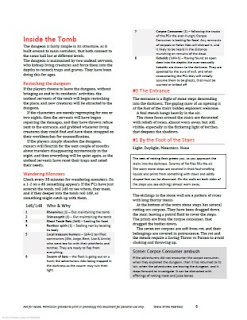 The PDF is plain, with no artwork. It somewhat mimics the 2e Red and White format used for the Core Rules cd-rom. As mentioned, it mostly uses Labyrinth Lord, but uses 3e style ability checks and 5e advantage/disadvantage, as well as mentions paladins.

Tomb of the Lovelorn is much shorter of an adventure than its page count (19 two column pages) would indicate, because it's got a lot of background material and detail. As such, it makes a pretty decent read, but I don't think it translates into a great adventure, despite its convention game roots, unless it was an hour long game. Still, it's cheap ($1.99) and some some interesting ideas that could easily be dropped into a much larger dungeon/crypt.