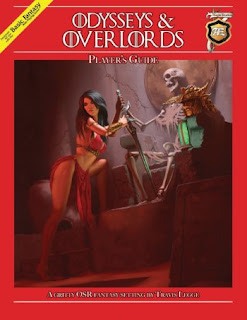 When I first saw Odysseys & Overlords I was somewhat excited, because it was that rare thing — a new OSR rules system that isn't simply house rules based on or a hack of Swords & Wizardry. Firstly because there are so many of those, and secondly because I just really, really hate Swords & Wizardry. Mostly because of the single saving throw, but also because I don't think OD&D was all that well designed, and that 1e, for all of its own problems EGG introduced, fixed most of OD&D's problems.

But then I realized it was based on Chris Gonnerman's Basic Fantasy RPG. While that is a solid, if flawed, OSR styled game, the question then becomes, what does Odysseys & Overlords do different than BFRPG? And the answer is, not a whole heck of a lot. At least in the Player's Guide.

Essentially, in Odysseys & Overlords, there's only four races & five classes. You've got humans, "Abyss-kissed" who are basically tieflings from 2e, "Spellscorched" who seem to basically be elves (only they live as long as humans), and "Wild Folk" who basically are beastmen, essentially half-orcs but with claws. 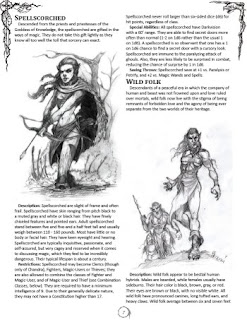 The classes on the other hand, aren't even renamed. You have the fighter, magic-user, cleric, thief, and bard. The first four are pretty much straight out of BFRPG, though each gets their hit dice bumped up by one die type (fighter from d8 to d10, cleric to d8 from d6, both thief and magic-user to d6 from d4). There is some limited multi-classing allowed.

The only thing truly different is the Bard. I am not sure where it's from, or if it's original to this, but it seems somewhat inspired by the 5e Bard. Basically it doesn't cast spells, but can sing magical songs a few times per day (depending on level). This can cause spell like effects, some of which are just spells cast at the same level as the bard (such as sleep or charm person), or cause or heal damage according to the bard's "inspiration die" which starts at d4 but increase to d12 as the bard levels up. It's an interesting class, though seems weaker than the cleric or magic-user in terms of magic, doesn't fight better than the cleric, and lacks the skills of the thief.

Anyway, these changes do address some of my criticisms of BFRPG, namely the low hit points, but it doesn't address what I feel is the main problem — the terrible attack bonus (it uses attack bonus and ascending armor class) for everyone, but especially the fighter. At 1st level, the attack bonus for a fighter is +1. At 20th level, that attack bonus is a whopping (that's sarcasm) +10 compared to a cleric's +8 (and a magic-user's +7).  Even worse, the cleric has a much lower experience table, so at a million XP, the cleric and fighter have the very same attack bonus. But the cleric can cast a ton of spells on top of it. 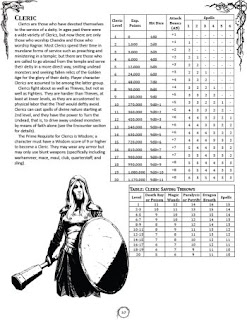 Ah, but fighters can use swords and clerics can't, you say! Well, like in BFRPG, here maces do 1d8 damage, just like swores, and clerics can opt to wield a 2 handed maul that does 1d10, just like a fighter wielding a 2 handed sword. So other than 1 hp per level, there's no reason to play a fighter, and even that is somewhat offset by the lower XP requirements of the cleric. (This is one of the reasons I prefer AD&D. The fighter gets so many things to make them a better fighter than the cleric — the additional hit points from high constitution, exceptional strength, and an attack that improves by one every level).

The PDF does at least feature different art. I'm not sure if it's original, or just re-purposed stock art. The spellscorched picture really does look like an elf. Either way, there's not a ton of it.  I do like how they combined virtually all the information for a class into one area, even including attack bonus in the class level chart.


While the Odysseys & Overlords Player's Guide makes some slight improvements over the regular Basic Fantasy RPG rules, they are very slight and don't really justify the $3.95 price tag over a product that is free (and incredibly cheap in print as well). Maybe the setting is the greatest thing ever, but it's really not explained here.