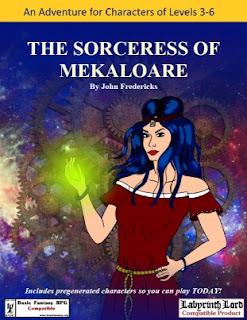 You never really know what you'll get in an adventure from John Fredericks and Sharp Mountain Games. Well, you do to a degree, you kno you'll get hand drawn art, battle maps, and pregenerated characters (using his own classes) that take up about half the product. But they can range from the short and boring to wildly imaginative and decent length.  The Sorceress of Mekaloare leans toward the latter, at least creatively (as it's a bit short, despite its 32 pages), with the PCs visiting another plane to rescue townsfolk from the titular villainess, including the mayor of the town the PCs happen to be in. 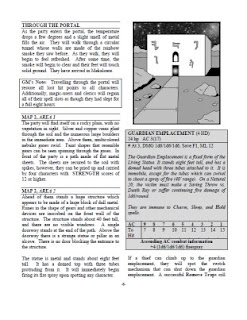 As you might guess from the name "Mekaloare", it's a place of mechanical beings. More like 1950s era robots than steampunk or futuristic ones. The PCs are sent there by a helpful wizard, who somehow knows exactly where they should go. From there, it's pretty linear, with the PCs essentially just visiting a small building on the plane. Basically they either just run into mechanical monsters or mechanical based traps, there's no exploration, just one run after another.

While not bad, it's a bit underwhelming. And short. And easy. While it's meant for 4th level characters, they don't face any opposition worse than 3 HD monsters, save at the very end and then only facing 5th level opponent. There's also not much in the way of loot

What is sort of interesting is the motivation of the villainess — she's kidnapping people so as to implant them with mind control devices to ensure world peace. I'm not sure how doing that to mayors in a fantasy setting will do that, but it's something different. 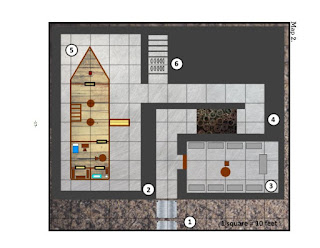 The PDF features a lot of original art. I'd say he's getting better as an artist, though still far from professional. The maps are small, but colorful and clearly meant for virtual table tops (and those are also available outside the PDF)

While I realize his adventures are meant to be short, easy to play one shots that can be played online with VTT software, this seems to be an average at best effort from him, falling well short of his similar, but excellent Lunar Library