Spire of the Kobolds Review — Spire or Molehill? 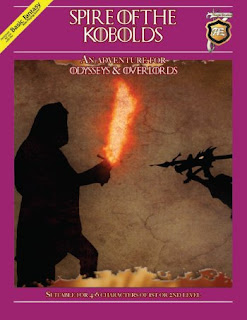 Spire of the Kobolds is a short (very short) adventure by Megan Irving for Odysseys and Overlords, a new OSR game by Travis Legge and Aegis Studios based on the Basic Fantasy RPG. Did I mention it's very short? The premise is also simple, there are kobolds, the PCs want to go there to kill them and take their stuff. However, like the trope involving kobolds, they aren't mean sword fodder for 1st (or even 0) level characters, they have the place trapped.

Not terribly elaborate, nothing like you'd find in say, the Grimtooth's Traps books. Tripwires and caltrops mostly, but there is one section that is oiled that the kobolds will then try to set on fire when the party enters. If not for the traps, they would really be a cakewalk, as there are only about a dozen kobolds in total, across the 7 keyed locations. 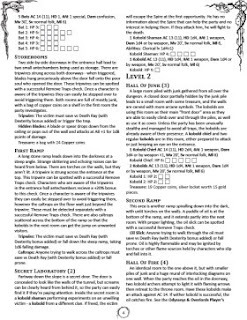 While there aren't that many kobolds, there's even less treasure. A few handfuls of copper, a handful of silver, and a flaming sword that merely does +1 damage.

The cover is a bit odd. I guess it's an homage to B2, but to me, a fuchsia  cover doesn't exactly scream grim and dark fantasy. There's no art, other than a picture of the spire. The map is by Dyson Logos, so somewhat more artistic than functional. They did use the Basic Fantasy RPG style of having boxes for hit points for monsters. This is actually very helpful if you are using a print version, but kinda useless in a PDF.

It's a competent module, if you ever need an encounter with kobolds in a lair. But I can't imagine a bunch of new players ever enjoying this as first adventure, as there its basically dealing with traps, not exploring or finding cool stuff, and worse, no loot worth mentioning for their pains. And did I mention it's short? It's basically 2 1/2 pages.