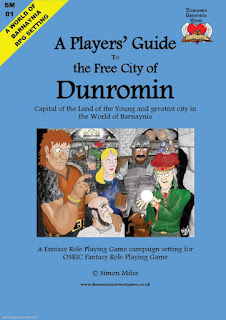 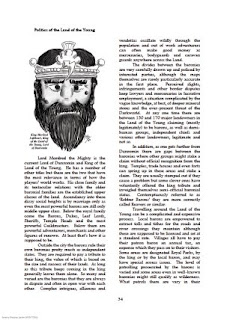 This humor, though present throughout the product, is fairly subtle and restrained, but goes a long way towards making this 250 or so page PDF more readable. Basically the book is in three sections: A history and general overview of the city; more detailed descriptions of places and people in the city; then additional rules, including new classes, house rules, and basically a replacement for non-weapon proficiencies (which aren't in OSRIC for some reason).

The history section is surprisingly dense, but basically the city was founded by a group of adventurers and is sort of a mix of Roman, Celtic, and Viking human races, including temples to those pantheons (plus Babylonian). There's also some elves and traditional fantasy races. It goes back a couple hundred years and a decent amount of stuff happens, some of which may be relevant to PCs (there's a civil war brewing) and periodic monster invasions, including one that is seemingly done by a Mind Flayer replacement called the Deep Race. They lack the face tentacles, and are more reptilians than Cthulhuian, but drain mental energy and are creepy looking. 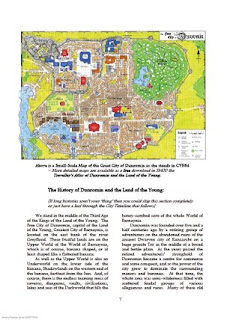 Various notable locations get detailed, ranging from temples to stores to inns and brothels. There's really nothing that truly stands out, but it has everything you'd expect. There really aren't that many places that the players would be drawn to, though. It's somewhat light on adventurer's dens (and heavy on temples).

There are a lot of new rules, about 100 pages of them. Some of these are basically just things from AD&D 1E/OSRIC, but tweaked slightly, plus new rules for things like critical hits, hit locations, and improving ability scores. There's also "Life Skills", basically non-weapon proficiencies.


Of most interest to me are the new classes. The first is the "Wild Domains Barbarian", which is basically a toned down barbarian, more on par with a fighter than the UA Barbarian. The most interesting thing is it has very expanded and detailed "frenzy" rules, which basically offers the character many different types of frenzy. For instance, giving a +2 to hit bonus or doubling number of attacks, running faster (and improving AC slightly), adding a bite attack, and more. There's even rules for Slaine comic "Warp Spasms" 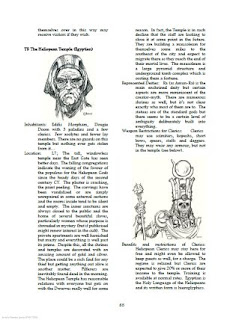 The Diabolist, despite the name, summons more than just devils, and can bind outsiders into items to make short lived magic items. They also get a mix of cleric and magic-user spells, though mostly limited and dealing with summoning or detection.

The Witch isn't really a full class, but something of a split or prestige class that can also be taken and is completely separate from the character's other class(es). Their spells only go to 4th level, but are a mix of magic-user and cleric, including healing spells. 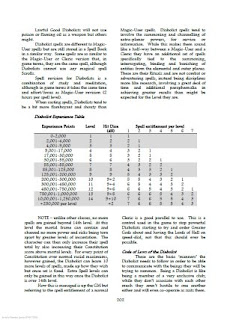 The PDF is fairly nice looking, with an easy to read layout. It's got a surprising amount of art, most very old school resembling stuff found in early 80s magazines, including some comic style art that resembles Finneous Fingers. The maps of the city and region are really professional looking and very well done

Ultimately, Dunromin is somewhat on the bland side, but does offer a good look at a 1e campaign setting developed from actual play. I find that interesting on its own merits, not simply as a place to use in my own game (which honestly, I won't). I also liked the additional rules, as I always welcome new classes and will probably use the Diabolist. I consider it a well spent $9.99