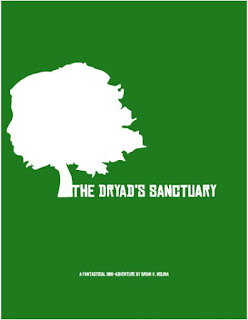 The contents of each area are mostly whimsical. A friendly satyr, a firbolg and a pet owlbear, elves with a human prisoner, a redcap (who are not actually forest faeries, but haunt castles), and giant bees. Perhaps the most interesting thing (but not really elaborated on) is a Brownie wedding. 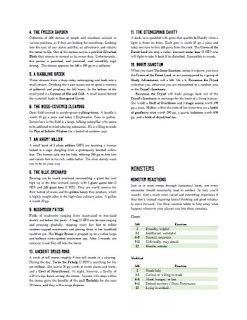 New monsters? No, basically old or existing monsters, but with different and much weaker stats. To the point where this module might, just might be challenge for a party of 0-level characters. There are a lot of magic items mentioned, but no actual details of the magic items, other than their names.

It's a very plain PDF. And despite it being a short PDF product, it uses a very tiny font that is hard to read on anything but a large computer screen. I really don't understand the point, either, as using a more readable font would have only increased the size by maybe a page or two.

The Dryad's Sanctuary seems more like an outline of adventure, as opposed to an actual adventure. It's also staggeringly mundane. There are a lot of artsy products that I don't like, like say, the Gardens of Ynn. But I at least appreciate the originality of them and the effort involved. This tries to be artsy (I guess) but lacks that originality and seems somewhat slapdash.
Posted by Jeremy at 8:06 PM