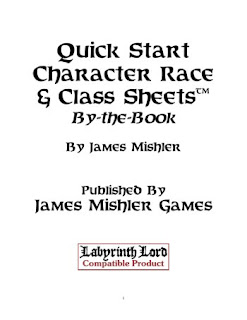 It actually starts off with sheets for Advanced Labyrinth Lord, one for each race. It describes the race, has age ranges (and their accompanying ability score modifiers), saving throw bonuses and special abilities (like infravision and detecting slopes or secret doors), thief modifiers, level limits, and what classes they are eligible for. Pretty much everything. One addition (at least I presume it's an addition over what's in the LL books) is random tables for hair/eye/skin color. This is really helpful for the non-human races. 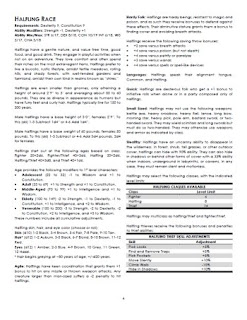 Next come the classes, done, like the races, alphabetically. It mixes in the advanced with the basic classes, so it might be a bit confusing for players who are new to the basic game.  It has all the info you need (at least at 1st level), starting with the requirements for each class, the abilities, bonuses, spells, ending up with starting equipment.

Some classes like Druid are crammed with information, while others, like Dwarf or Halfing (which are basically just fighters) are nearly blank. The page for fighter itself, though, is actually quite full, having different variations of gear depending on what sort of theme that fighter has. I'm not sure this makes all that much sense, at least from a game view, as many are just simply inferior to others. A fighter should have the best armor he can afford, regardless of his background. 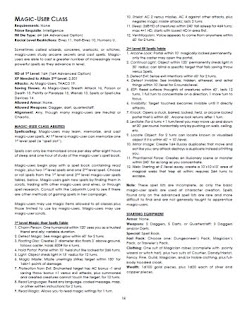 Lastly, there are four appendices. The first is how to roll up advanced edition characters. Secondly are lists of gear and their prices. Third you have "fast packs", basically lists of pre-bought gear by theme, complete with price and weight. Lastly, there's a very long list (table, really) of secondary skills a character might have.

This is extremely handy if you want to make Labyrinth Lord characters, especially for new players and is worth the $1.99 as a reference. But I wonder at how much popularity Labyrinth Lord still has at this point? Its creator has largely moved onto other games. There's a brand new B/X clone, Old School Essentials (formerly B/X Essentials), that seems to have filled LL's niche, at least with regards to the basic game. Hopefully Mr. Mishler will consider making versions of this for other systems.
Posted by Jeremy at 10:20 PM