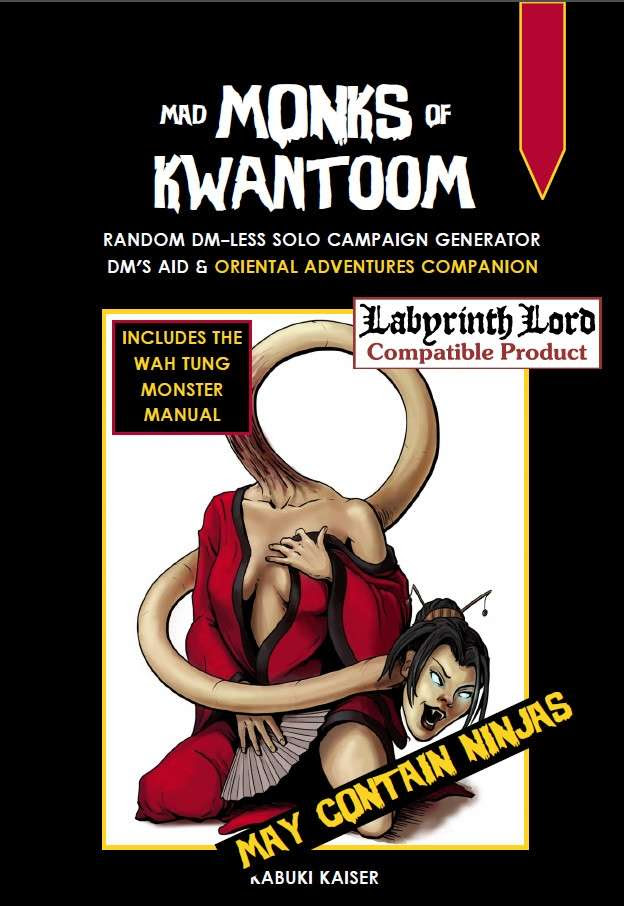 Mad Monks of Kwantoom by Kabuki Kaiser is an Asian themed game supplement for Advanced Edition Character Labyrinth Lord, which basically means it works with 1st Edition AD&D and other games where you have separate class and race. I call it "supplement" because it's several products in one. It's part rules supplement, part setting sourcebook, part dungeon adventure, and part monster manual. It's also largely aimed at solo gaming, just one person playing while also being the GM. It reminds me of some of the mini games from the 1980s, meant for solo play.

I say Asian themed because it's really a mash-up of both Japanese and Chinese culture and folklore. This is perhaps never more evident in the rules section, where several new races are introduced. Most of these are Japanese, like the Tanuki and Kitsune. On the other hand, the new classes intoduced are really all variations of the monk (thus the name of the product), which are mostly Chinese. If you are a looking for a historically accurate product, this isn't it, it's as much of a pastiche of Asian fantasy as regular D&D is of Western.

You have both a basic monk similar to the original D&D one, and then one that is based on it, but largely depends on what fighting school. Some schools do more damage, but have a worse armor class and vice-versa. Because this basic customization, there are a number of variant monk classes which are broader, including the Fakir (more Indian) and Ninja (Japanese).

Besides the new classes and races, there's a small section on how to play solo. More advice than strict rules or even guidelines.

The next section of the book describes the city of Kwantoom. It's divied up into several different districts. Each district gets a description, a list of prices at various shops and such, then a table of random encounters. These encounters sometimes get a paragraph of detail, but usually just a sentence or two, with combat stats (if appropriate) at the end of the section for the district.

You frequently need to make reaction rolls, and here is a bit tricky if you are playing anything other than Labyrinth Lord. In the original games and most retro clones, a high roll on reaction is good - you roll 2d6 and add your charisma modifier, and if it's above 8, it's a friendly reaction. In 1e AD&D, it was d100, but your charisma modifier was a percent, so basically the same thing. But in Labyrinth Lord, you roll 2d6 and low is good. Not being a Labyrinth Lord player this confused me at first.

While this is good at describing the city from a game mechanical point of view, the city itself isn't detailed at all in prose. What does each section look like? What NPCs live there? You aren't told at all, just tables.

Then comes the adventuring portion of the book, which is devoted to a megadungeon, the 1001 Pagodas of Doom. This megadungeon is randomly generated, using the usual sort of tables, albeit tweaked to produce more Asian themed results. The monstrous contents of the rooms are heavily skewed according to the level of your party. Occasionally you get a special result on the random tables which direct you to look at the secrets section at the back of the book. These are for unique encounters.

The new monster section has 48 new monsters. These are not exactly from Asian mythology, but from pictures created by a match book company (Wah Tung) for their matchbox covers. Just what these pictures are meant to really represent is apparently unknown, so the author just made stuff up. Some of these are twists on D&D monsters, like the Geisha Roper, Manstirge, or Blood Golem. Some are just weird, particularly the Living Tools (a bucket and broom). But most have a lot of Asian flavor, such Hauchiwas, Naigu, and Tanwo, which I can't even begin to describe.

The layout is single column with a fairly large font, essentially being similar to the original little books for D&D. This means that the 200 odd pages is really more like 100 pages in terms of actual content, but it also means it's much easier to read on a tablet, especially for my middle aged eyes. The author has added annotations in red in various places, some meant to be amusing, others to point out things like differences between Labyrinth Lord spell names and D&D spell names.

Mad Monks of Kwantoom isn't the usual RPG sourcebook. In someways, it's more of a toolkit than anything else, but it's a very comprehensive toolkit. At least if you want to play a monk in a randomly generated dungeon. It's also really quite funny.