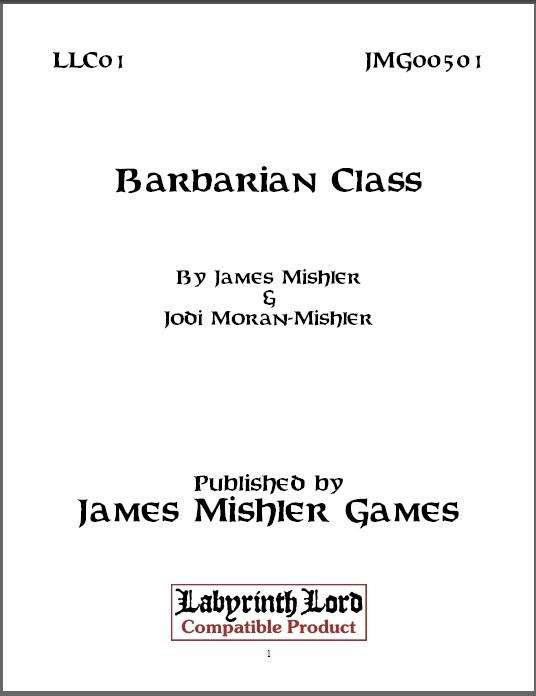 Thanks pretty much to Conan (along with Red Sonja), the barbarian is seen as a classic fantasy archetype. So it's not too surprising it's often the subject of a new character class, originally (as far as I know) in White Dwarf #4, then an official version by Gary Gygax in Dragon magazine and then later Unearthed Arcana.

The Barbarian Class from James Mishler Games, written by James Mishler & Jodi Moran-Mishler, is pretty much the AD&D 1e barbarian, restated for Labyrinth Lord, and with some tweaks. So essentially a fighter that has a d12 for hit points, can jump, track, and climb while outdoors. Also something I didn't remember well was that the barbarian could use first aid and had something of a danger sense. The original barbarian had some skills related to the area he was from. That is true here, but instead of only a few different types of homeland, there are seven, which is quite nice.

On top of those abilities, this barbarian gets a few more. He can go into a berserk rage, something found in the 3.x barbarian. He also gets one favored enemy, much like the ranger, only +1 to hit and damage for every 5 levels he has.

One thing missing is the 1e barbarian's phobia of magic. That was somewhat unworkable in practice, because usually you had a magic-user in the party, and what would that player do, just not show up? Roll another character? No, you just ignored that rule. So good riddance. It also gets rid of all the bonuses the barbarian got to compensate for his unwillingness to use magic.

And in an answer to the problem of why shouldn't barbarians wear armor (as they are commonly depicted as being unclothed), there is an unarmored (mostly, you can still wear a loincloth and chainmail bikini) armor class bonus, improving by one for every three levels, as well as adding the charisma bonus.

All these extra abilities (over a fighter) come at a price, though, more XP needed to level. The official AD&D barbarian required a ridiculous amount to level, 6000 to make 2nd level, compared to the fighter only needing 4000, so would generally lag behind a full level until at 9th, the fighter would gain twice as many levels as the barbarian, as it only needed 250,000 to level, and the barbarian required 500,000.

This barbarian class has an easier time leveling at first, needing only 3000 xp to reach second level, doubling for each successive level, finally at 9th level and beyond needing 192,000 xp. This compares favorably to the Labyrinth Lord fighter's 120,000 xp after 9th level. The fighter will gain levels a little faster, but not overly so, and thus the barbarian and fighter will stay roughly equal in "power" despite a level discrepancy.

The PDF is art free, but easy to read, even with the two columns of text.

Much like the original AD&D barbarian, this one might be somewhat overpowered and overly complex — I mean, it takes 5 two column pages to describe all its abilities. But on the other hand, it seems fun to play and probably not too outlandish, it's something I'd allow in my games.