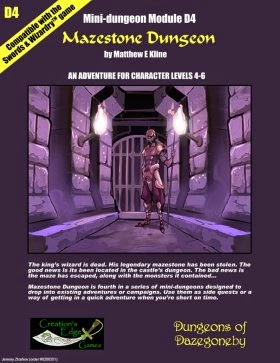 Magestone Dungeon is the 4th in the line of Dungeons of Dazegoneby, mini-modules for Swords & Wizardry, from Creation's Edge Games. This line started about a month and seems to be their first foray into OSR stuff. It's a short module, only 11 pages, and only 7 keyed locations/encounters which takes up about half the PDF, with another page describing prisoners in the dungeon.

Although I'm not a fan of Swords & Wizardry, but I couldn't help being lured in by the blurb for this module: The king’s wizard is dead. His legendary mazestone has been stolen. The good news is its been located in the castle’s dungeon. The bad news is the maze has escaped, along with the monsters it contained). The low price, $1.50, sold the deal.

While there aren't many encounters, they are fairly well described/detailed, complete with boxed text which gives a clue as to what kind of monster is in the area. There's also a fair amount of extra detail - each of the prisoners gets a full write up, as well as ideas for further adventures after this one.

On the other hand, with one exception, a new monster called the maze men, the monsters are all standard. They also tend to be "save or die" monsters. You have a giant spider which can poison, a cockatrice that can turn to stone, and a gelatinous cube that can paralyze and engulf.

I ran it using 1e with a 4th level Paladin, a 3rd level Cleric/Ranger, a 4th level Bard (the one from Dragon, not the PHB), and 3rd level MU/Thief. It took about 45 minutes, although they avoided three of the encounters. One was the cockatrice which they ran from, one was the gargoyle trap they didn't fall for, and the other was the maze men whose room they didn't discover because it was behind a secret door.

For the most part, they found it easy enough, though there were a few anxious moments when saving throws needed to be made, which would have been worse if they fought the cockatrice.

The layout is simple and clean. Most of the art (including the map) is black & white stock art, except for the illustration of the new monster, which is pretty nice (and in color). There are big icons next to the monster and treasure part of each encounter, so you can find them quickly.

I liked it quite a bit, and will probably end up getting others in the line. While not the longest adventure in the world, that was sort of the point, they are "mini-dungeons" after all, and it delivers a solid amount of entertainment.