Judges Guild Inferno will finally be complete on Sept 28th... 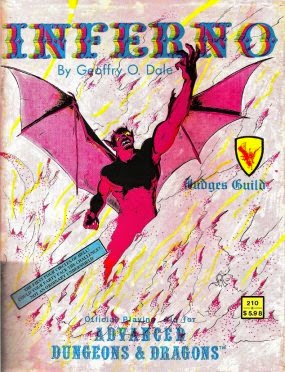 Judges Guild was known for their hex crawls, and one of the more ambitious ones was a hex crawl in Hell, called Inferno. That only featured the first four circles...then a fifth circle was detailed in the third issue of Fight On!

Well, the original author has been working on it and will finally publish it via his company, Spellbook Games.


Inferno: Journey through Malebolge, the expansion and completion of the 1980 JG module, Inferno, goes on sale on September 28, 2014. Inferno describes an area almost 400 miles across and 1.25 miles deep consisting of the ten Circles of Dante's Hell. It features more than 70 encounter areas/dungeons with detailed statistics for more than 75 denizens (including 5 Diabolic Earls). The module will be available from DriveThruRPG; the PDF version comes as a 3-file bundle (cheaper) although each book can be purchased individually. The print-on-demand versions can only be purchased as separate books (more expensive plus printing fee plus shipping). There will also be a PDF bundle available consisting of all the Inferno files (3 Journey books, Inferno 1980 {the original JG module}, Gehenna Primer, Inferno: Bestiary, Codicil of Maladies, Gazetteer of Hell - Fire and Ice, and Gazetteer of Hell - Blood and Mire; Treasury will be added when it is published). Journey through Malebolge is completely compatible with the two current Gazetteers of Hell and the two Gazetteers now in production (available later in 2014).

I am nearly finished editing Inferno: Treasury, the essential reference for the artifacts and unique enchanted items found in Inferno; these are NOT described in detail in the text, only referenced by object name. My hope is to release Treasury on Sep-28 but that may slip a few days into early October.

Neat, but looking at the prices of his other stuff, probably expensive as, er, hell.
Posted by Jeremy at 4:08 AM