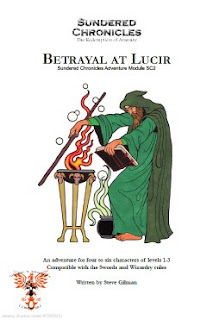 Betrayal at Lucir is the second module from Sundered Blade Games, the first The Shrine of Sruukor is Pay What You Want, while this is priced at $2.99. It's meant for Swords & Wizardry, level 2 or so, but could possibly serve as a starter adventure.

It's something of a semi-sandbox. The basic area (the town of Lucir and the surrounding area) is detailed somewhat, and then there are two events which lead to the PCs running off to two different dungeons. One of these events is what the title refers to.

The area has something of a Celtic feel to it, at least the names do. The town has an apothecary, inn, church (dedicated to a forrest goddess), smithy, and market square. Perhaps more, but those are the things that get a write-up. There is no town map as near as I can tell, but the level of detail for things described is quite good, with the exception of stats for the mentioned NPCs (there aren't any).

There is however a map for the wilderness region surrounding the town. It details two places the PCs will probably need to go, as well as three other side encounters, one of which is detailed further in another (and Pay What You Want) PDF.

As to why the PCs will need to go there, as I mentioned, there are two "events", basically plot hooks that will lead the PCs to the two included dungeons. One of these events is tied into the Celtic nature of the area, a guard spots a old woman carrying a baby into the forrest. That of course is a hag, and one of the town's children has been switched with a changeling. Presumably the PCs will rescue the infant. The other less subtle, a massacre happens at the town's church and they must pursue the evildoers.

One dungeon is actually a tower and the other is actually a house. But they are still dungeons where the PCs must explore from room to room, even though in both cases, there is a purpose behind the exploration. They are about the same in size, one 12 rooms the other 13.

The tower mostly pits the party against humans with classes, including a second level magic-user with a sleep spell. So run intelligently, that is a potential pitfall for a low level party.

The house doesn't have as many combat encounters and mostly consists of fights with manes demons, except for the last showdown with a possessed cleric and the demon that possesses him. That latter is likely killer, since it can take over the body on an attack if the saving throw is failed. 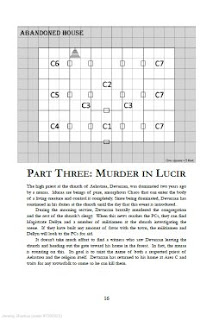 The PDF is somewhat spartan but functional and features single column text with a few stock art illustrations. The maps are much the same, very basic but easy to read. I probably would have preferred them separate and at the back of the PDF rather than placed in the interior where relevent.

Beytral at Lucir is a solid, competent module. It didn't "wow" me and make me want to immediately run it, but it didn't make me roll my eyes, either. It also doesn't seem quite complete, or fully fleshed out. I think much like Witch of The Tarriswoods (which I reviewed last week), it's best cannibalized a bit, adapting it to a fuller fleshed home base, or used as sidequests while PCs are traveling.
Posted by Jeremy at 5:07 AM