The Witch of the Tarriswoods Review 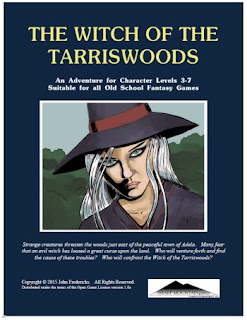 The Witch of the Tarriswoods is an OSR module from John Fredericks and Sharp Mountain Games. It's a short low level (3rd or so) adventure meant for Basic D&D, though of course it works reasonably well with any OSR game. It does seem to rely a lot on both ability checks and open doors checks, for what it's worth.

The plot is fairly simple (and there is one, it's not a sandbox), basically the town of Adela is having problems and it's up the PCs to solve them. As can be guessed from the title, the problem is the doings of a "witch" (actually a 5th level MU), who has unleashed (perhaps somewhat unwittingly) an evil at a ruined shrine in the woods. So the PCs must go to the shrine and solve the problem.

On the way they have three encounters, one involving the rescue of a farmer, one with skeletons, and the last is really more of an obstacle that they must get through using ability checks. Once they reach the shrine, it has two small levels, the first with 5 areas and the second with 3, including the final showdown with the witch.

Though there aren't many, the encounters in the shrine are fairly original, with a couple of new monsters, as well as a pair of talking stones. They are also very well detailed encounters, with at least three paragraphs for each one and having information on the consequences of things the players might do. Monster stats are standard except for the inclusion of a mini to hit chart for each monster, giving the roll they need to hit each AC from 9 to 1. There are also a couple of rather whimsical new magic items.

The PDF is pretty nice looking, two column text and with original art. There are three maps (which also come in jpg and separate PDFs), both in color and B&W. It's advertised as having maps suitable for use in a virtual tabletop program, and while I have no experience with such a thing, they certainly look up to the task. 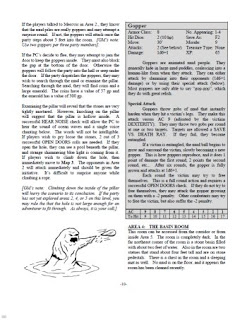 Lastly, you get 4 pages of pre-generated characters, all done using Basic D&D, as well as a few from another product from Sharp Mountain Games which has rules for non-standard Elf/Dwarf/Halfling classes, though they aren't exactly mind blowing. They are just cleric, magic-user, and a thief with dwarf, elf, and halfling racial abilities. No personality or appearance, just stats and gear.

All in all, I liked The Witch of the Tarriswoods (and at $2.49, think I got my money's worth), but I wish there were a bit more of it, especially the town. Adela really isn't described at all, except indirectly through the descriptions of a few NPCs. As it is, it's probably most useful as a mini-adventure to add to an existing town your characters are based in, or as an side adventure as they are traveling. Could also be used as a minor plot with a Beyond the Wall game.
Posted by Jeremy at 5:21 AM