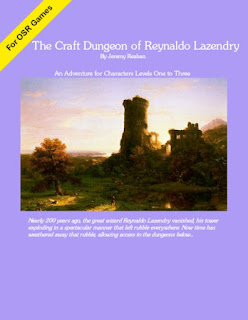 Was originally going to be "Hobby Dungeon", but then I realized that was too close to the Hobby Shop Dungeon. It's a fairly large dungeon that I made a couple years ago when I started up a new game. I had originally used a free map from Tim Hartin from his website, but ended up changing a lot of things and re-drew it, much less artistically.  It was going to be the first module I released, but it was rather large and never got around to finishing polishing it up.

It's the first level of a larger dungeon. The premise is that an adventuring wizard retired, but grew bored. So he took up a bunch of hobbies, which the first level is devoted to. It also comes with a village that I used as a home base. All in all, 30 pages.

You can get it free from TinyUpload, or MediaFire or as a Pay What You Want title at DTRPG

Email ThisBlogThis!Share to TwitterShare to FacebookShare to Pinterest
Labels: Free, Module, My Stuff