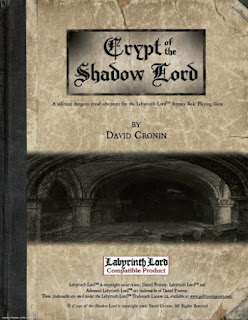 Crypt of the Shadow Lord is a short solitaire adventure for Labyrinth Lord and the first product from DPC-RPG Games (which I'm guessing are the initials of the author, David Cronin). D&D actually works fairly well as a solo RPG. But what it doesn't really do is work well as a single character game. Perhaps because of this, solitaire adventures have always been rare, especially so among the OSR. (Note that Kevin Crawford created rules to address this problem).

The premise of the adventure is pretty much stated in the title. You play a 1st level cleric sent on a mission to investigate a crypt and rescue a missing farmer. It follows the basic Choose Your Own Adventure structure, you start at entry 1 and then are directed to read other numbered entries, based on your choices and your die rolls.

These die rolls include combat of course. You will fight zombies, skeletons, rats, and even a swarm of "normal bats". I am somewhat skeptical a swarm of bats could harm someone unarmed, much in armor.  I myself have been the recipient of a bat attack more than once (there's 3-4 that hang out by my dusk to dawn light), at most they mess up your hair a little. It's like being hit by a thrown badminton shuttlecock.

Beyond combat, there are also a number of abilty checks. Dexterity to see if you avoid stuff, Wisdom to see if you notice stuff. While I actually use the latter in my games, some might find it too new school. I usually use it for minor stuff, will they spot treasure or a secret door. Here it's basically used as a "save or die" mechanic. 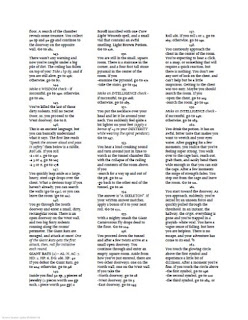 Between the combat and the save or die stuff and just making bad decisions, it's a pretty deadly adventure. Mitigating this somewhat is you are playing a cleric and thus can turn undead and likely have a high wisdom score.

Less randomly, there are also a number of riddles. Most of these are pretty easy. Still, part of the trouble is that you write down your answer and then go to the entry to see if it's correct. If it's not correct, it trusts you to go back. I think a better option would have been to give some possible answers, with you selecting one.

Should you beat the adventure, your cleric should have enough loot to reach 2nd level. Most of it's just jewelry, the only unique treasure disappears at the end.

It's a somewhat spartan looking PDF, with no interior artwork at all. It uses a three column layout, along with fairly small-ish text, which makes it a bit hard to read on a tablet. If it were a print product I might understand, but it's not. On the other hand, since there are no bookmarks or links, it does make it much easier to read the next entry without having to changes pages.

As a kid, I loved CYOA style books, and I've actually written a couple of these back in my younger days, one was Dragonriders of Pern fan-fiction and the other was in a haunted house. So I know how much of a pain the can be to write. However, it's pretty short to play (around 45 minutes) and the replay in this is rather limited, so at $3.99 it might not be the best value.
Posted by Jeremy at 5:30 PM