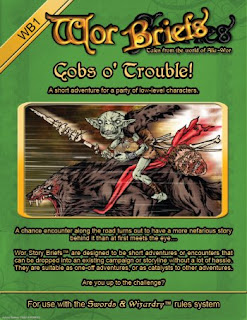 I really liked The Beast that Waits from Three Sages Game, it was an excellent sandbox-ish title. However, I'm guessing I was one of the few that even noticed it, since they have moved on to other game systems, with their only other OSR module being this, Gobs of Trouble. It's a very short mini-module (priced at $1).

As the name implies, it involves trouble with goblins. A small band of them has displaced a family from their farm. The party presumably stumbles across the evicted farmers and decides to help them by retaking the homestead. If they do that and succeed, they then discover that the goblins have been in turn kicked out of their lair by an advance party of hobgoblins.

However, to do so, they need to find the right cave. Thankfully there are only two possibilities. Unfortunately for the PCs, the wrong cave has a hydra in it. However, common sense should let them know which is why (if your players have that, that is). 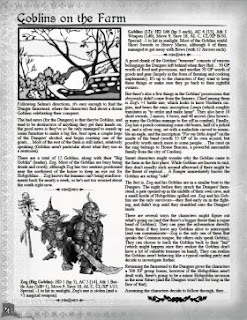 And that is that. Except the hobgoblins in the setting for this game are not the usual hobgoblins. They seem to be something more out of science fiction. They have two unusual weapons, a serrated long sword that curves forward like a kukri and has a slight electrical charge, and an energy rifle. Both are seemingly organic based and dissolve when the hobgoblin owner dies, at least if it was holding it. If taken before it dies, it stays.

The PDF is somewhat "heavy" with overly detailed background to the pages and artwork, not surprising as it has more megabytes than pages.

It's really more a short encounter than adventure, but I think it's well done enough to warrant the price tag and I like the strange hobgoblins.
Posted by Jeremy at 8:44 PM