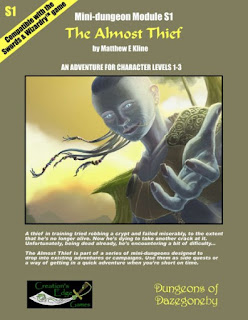 S1 The Almost Thief is the first in hopefully another series of mini-modules from Mathew Kline and Creation's Edge Games. I'm not sure what the letter code means, he's gone through D,E,G, and L (with A being used for his sole full length module, Aginst the Goblins), as the subject is generally somewhat random, seemingly inspired by the piece of stock art he used for the cover.

In this module, that cover is a ghostly and somewhat sad looking young man. Which sets up the background here as well, it seems a young, would be thief (or grave robber) decided to rob a local tomb and got himself not just killed, but turned into a ghost, who is now haunting his girlfriend. She is something of a focal point for him because he broke into the tomb to recover a family heirloom, a ring to use as a wedding (or engagement) ring.

In a touch of pathos, his girlfriend hires the characters to break into the tomb and find the piece of jewelry, hopefully putting his spirit to rest. Adding a bit more and possibly some comedy, the ghost accompanies the characters. 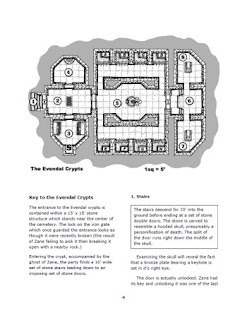 This is almost a mini-mini-dungeon. While there are 8 rooms, basically there's only 4 areas of interest. The first is a library of sorts. While most the books have comical titles (and are almost worth the price of the PDF in of itself), some are also used as part of a puzzle, essentially acting as keys to the crypts in the main tomb room.

If the PCs don't figure this out, they can still open the tombs, but will end up fighting all eight of the zombie inhabitants at once. This could be a big deal or not, depending on the size of the party. The rest of the tomb is more standard, though there's a new monster, the necro-ooze which can be a rather nasty surprise.

Although written for Swords & Wizardry, I can't help put wonder if the author has been playing 5e lately, since some of those features have seemingly crept in, with references to critical hits and d20 based skills. 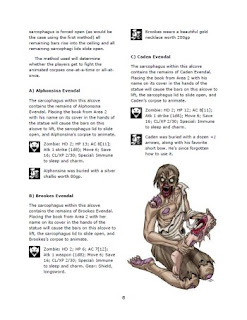 Like all his PDFs, it's easy to read with a simple but functional layout, two columns (albeit large text) and sprinkled with lots of stock art.

It's a very charming module, with a very nice backstory, but it's very short. No more than an hour, I would say, at least the dungeoneering aspect of it. Unless you have a very, very short session planned (like say, at lunch), it's difficult to use as is. On the other hand it is easy to cannibalize and drop into a larger tomb complex and like all their modules, dirt cheap at $1.50
Posted by Jeremy at 2:08 AM