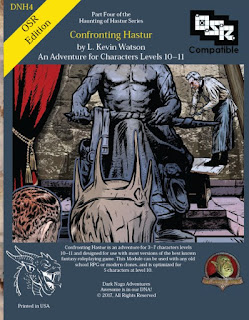 I was a fan of DNH1 The Lost Temple of Forgotten Evil (so much so I apparently reviewed it twice), which was a fairly lengthy scenario involving tracking down and eliminating an evil cult that worshiped Hastur, a Great Old One from the Cthulhu Mythos. It wasn't very Hastur-ish (he's my favorite Great Old One), but it was good if you consider it a more generic evil god. Strangely though, the next two modules in the series had little to do with Hastur, or even adventuring, instead they describe sort of an alternate version of underground elves and the trading network they used.

With DNH4 Confronting Hastur, the action against the cult resumes. The PCs are once again tasked with finidng and eliminating the cult's stronghold. But in this case finding the hideout consists of simply talking to about half a dozen suspicious people. Not that the PCs determine they are suspicious, but some NPC does, simply giving them a list. 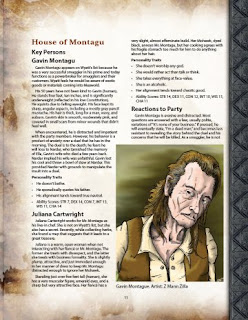 It's up to the PCs to decide how to investigate these suspicious people. They do have the option of sneaking into their homes, with each home (often a large manor) described and keyed. But it can be accomplished simply by talking to them and asking if they worship Hastur.

Once they find him (and it's easy, because he's crazy and sheltering an evil mole person), they find the location of the secret cultist lair, underneath a castle. Which presumably they storm. The upper level of the castle is detailed, to the point of listing the contents of each food storage area. Kinda overkill. Especially as the dungeon level of the cult is so sparsely detailed that the entire key to it fits on one page.

Furthermore, the dungeon is completely straightforward, nothing weird, nothing creepy, completely ordinary. Even the confrontation with Hastur in the title is just with a statue. And upon destroying it, the party gets sucked into Carcosa, presumably the next module. No chance to avoid. However, as that module is not out yet, you can't really run this without putting your game on hiatus until it does. 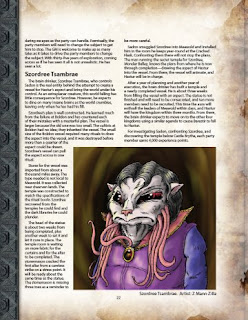 For some reason, they apparently got assistance in OSR (in this case S&W) conversion from 5th edition from Frog God Games. Considering how poorly Frog God's own 5e and 3e releases are converted to S&W/OSR, they should have found someone else. It's got a lot of 5e-isms left in place, and although the listed level is the rather specific 10-11, it seems like 6-8th is more suitable.

The first module in the series featured the somewhat dubious artwork of Rick Hershey. This featurse art by a couple of similarly awful artists, but one, Henriette Boldt, is actually quite good, to the point where her art sticks out somewhat in contrast. The maps are in the awful modern style of brown and grey rooms with brown and brey features and are hard to read/distinguish. 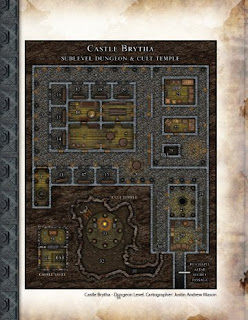 The first module in the series was a fairly lengthy adventure. This is the opposite, basically a short adventure (a 1 page dungeon) with lots and lots and lots of padding. It's not even interesting as an investigative adventure, as the cultist gives himself away when talked to.

The final dungeon isn't a challenge. It's not even a dungeon, it's just like a living quarters. I suppose there are some redeeming features, like if you need some estates for players to investigate. But as a module, it's a mess.
Posted by Jeremy at 1:00 AM