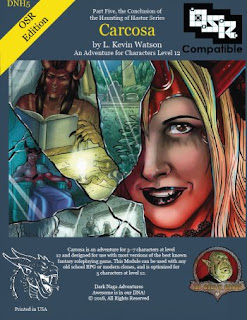 Along the shore the cloud waves break,
The twin suns sink beneath the lake,
The shadows lengthen
In Carcosa.

Strange is the night where black stars rise,
And strange moons circle through the skies
But stranger still is
Lost Carcosa.

Songs that the Hyades shall sing,
Where flap the tatters of the King,
Must die unheard in
Dim Carcosa.

Song of my soul, my voice is dead;
Die thou, unsung, as tears unshed
Shall dry and die in
Lost Carcosa.

DNH5 Carcosa is presumably the last module in the Hastur series from Dark Naga Games, written by L. Kevin Watson. It's a modestly priced (at least when I bought it) at $4 for a 30 page module plus illustration book, chocked with new original art. It takes up directly after DNH4 Confronting Hastur, which leaves the characters transported to Carcosa, the place from Robert Chamber's The King in Yellow.

I first came across Robert Chamber's The King in Yellow a few years before I got into Lovecraft and Call of Cthulhu, in a book on UFOs by Jacques Vallee (the inspiration for the French guy in Close Encounters), who used the quotes from it to start chapters to convey the sense of other-worldliness, of eeriness, that he believed applied to UFOs and their inhabitants. If you aren't familiar with it, The King in Yellow is a series of short stories loosely based on Chambers' time in Paris, including a handful of weird stories involving a strange play and the effects it had on its readers. The play is set in Carcosa, which seems to be a city on an alien planet by a lake (the Lake of Hali), across from a neighboring city, Alar.
This idea was picked up by Lovecraft and August Derleth who added it to the Cthulhu Mythos, along with Hastur as a Great Old One. Other authors have also used Carcosa. Marrion Zimmer Bradley used it for her Darkover series. In gaming, recently Geoffrey McKinney has released a number of products for his version of Carcosa which is weird sword and planet. And personally I wrote an unpublished novel set there. My Carcosa was essentially a prison for Hastur, populated by various human cultures snatched up by aliens (Mi-Go) and transported there when their civilizations had fallen. Essentially an excuse for a mash up fantasy world. 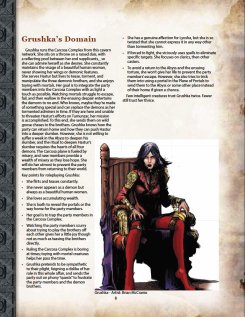 This Carcosa isn't like any of the other Carcosas that I have read about, although it's still the home to Hastur, currently sleeping. Instead it's basically a very tiny pocket plane, a dungeon ruled by 4 different demon lords, and dozens of inhabitants that have been trapped there for eternity. Which could include the PCs if they don't escape in 24 hours. Besides that goal, the PCs have a  much larger task, at least if they want, to keep Hastur asleep for another million years, isntead of a few more decades. This is done by performing a ritual involving the hearts of the 4 demon lords, which thus requires them killing each demon lord (who all have Russian names, for some reason).

However, in true action movie style, the PCs get to take them out one at a time, rather than fighting them all at once. They are a woman and three brothers. They do not particularly like each other, although all three have a crush of sorts on the woman, which she uses to manipulate them. Despite this, one really hates the others and it's possible to enlist his aid to take out the other three, and presumably let the PCs kill him for his heart. 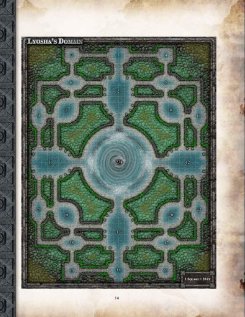 Each of the demon lords lives in his or her own domain, each a mini-dungeon, which are populated by 4 new types of demons. The Batu is a giant like creature with 12 hit dice and can throw rocks. The Mara looks human but with an insects chitin and have 13 hit dice. They also are diseased. Runo are humanoids with a huge head with shark features. They have 9 hit dice and have no special abilities. Lastly are the Yeles, who seem to be the most common in the module. They look like the demon from Amityville 3D (which probably no one reading this has seen), sort of a lizard-human-insect combination, and are pretty tough, at 12 hit dice. They have little in the way of offensive powers, just being stealthy.

The lady demon lives in a rather small cavern and is friendly to PCs when first approached, though not genuinely friendly. Her treasure horde contains a book that describes how to put Hastur to sleep and to exit Carcosa. So they pretty much HAVE to kill her. The first brother lives in a sewer system that is surprisingly orderly and symmetric. He's also somewhat friendly, but a devote follower of Hastur. So they really have to kill him, too.  The second brother lives in caverns with lots of mushrooms. He's a nasty sort of demon and presumably the PCs will just kill him. The last brother lives in a library of sorts. 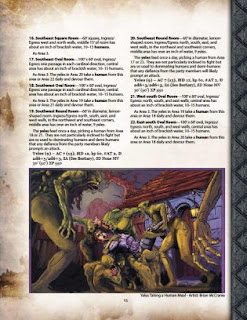 The past module, DNH4, was for S&W, this veers back more to a generic 1E-ish OSR. Indeed, as it's meant for 12th level characters, I suspect that 1e characters would have a much greater chance of surviving/accomplishing the tasks than 12th level 0e characters. With that said, the stats for the demons in the book are a bit odd, perhaps almsot 5e ish. The armor classes are fairly bad, the lowest being 1 for the demon lords. 1e characters, especially using rules for weapon specialization, would be able to go through them like paper. On the flip side, they all have high hit dice (especially the demon lords at 20), so they will probably hit the PCs a lot as well, and the demons do a lot of damage. So essentially you have a slugfest.

Like previous modules (I can't believe I bought them all), you get a adventure book and illustration/map book. The layout is decent and easy to read. The art has been mixed from module to module, but probably is the best here, featuring mostly the work of Brian McCranie, an artist new to me but quite talented. The style is somewhat modern comic book-ish, but not too garish. 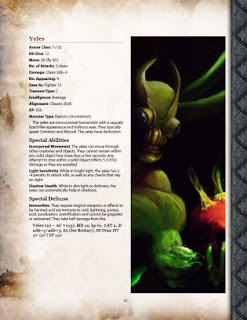 It's hard to duplicate the feel of Robert Chambers The King in Yellow  - the decadence, the surrealness, the languidness. The only author that even really captured it to my mind was Karl Wagner in The River of Night's Dreaming. You can do surreal adventure in D&D, the Wonderland inspired stuff shows it can be done. But DNH5 Carcosa did not even try, essentially delivering a very basic hack & slash dungeon with minimal roleplaying and little weirdness.